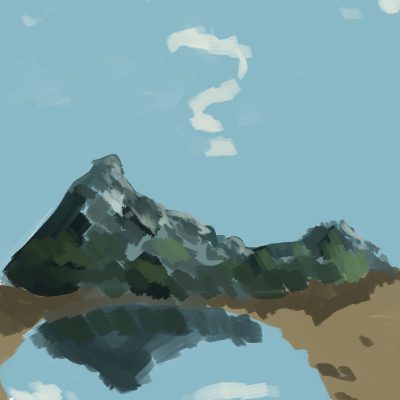 Is God unknowable?1 The answer is a little bit No and a whole lot Yes.

We can know God. Well, we can know general things about him like his beautiful attributes: he is forgiving and just, he establishes the truth, he is majestic, he is The Judge, and many more.

What does the Quran have to say about knowing God?

When Prophet Jesus speaks to God on the Day of Judgement, he says, “[…]You know what is in me, but I do not know what is in you. You are the Knower of all things hidden.” (5:116)

Even Prophet Jesus has nowhere near a complete knowledge of God in any sense whatsoever. A quick side note: although the Creator knows what is in our hearts, it’s through life’s journey that we discover the truth about our hearts for ourselves.

We surrender to the things we know about God and to all the endless, infinite things that we don’t. What do we know about God: the all-important basics of course. Our daily interactions with the Creator prove that he is there for us—he created this planet that provides food out of dirt—with him is all hope in any circumstance, he is the only one upon whom we can always trust, and so on. Please feel free to add many more beautiful basics of God that you’ve experienced 🙂

All truth helps us grow by leaps and bounds, but how does this truth help?

There’s a certain arrogance that festers when we think we truly know God. There’s also an electric liberation that comes by admitting we don’t.

People who say they know God end up putting limits on him. This happens without exception. They end up judging people as only God can. They think they can condemn someone to Hell or consider themselves or others a saint.

“Do not consider yourselves pure, he knows best who is righteous” (53:32).

They will literally tell someone that their prayer is not accepted for this or that superficial reason. Only God knows if a person’s prayer is accepted. Someone can make a prayer in Navajo and God will accept it. Another example is calling people kaafir (a thorough ingrate to God). These decisions are strictly in God’s domain. He is The Judge (Al-Qadi, Al-Haakim). He may judge the person being called kaafir as a true servant, while judging the accuser as the true kaafir.

“Oh you who believe, let not one people mock another people. It may be that the (ridiculed) are better than the (ridiculing)” (49:13).2

When we accept that we don’t truly know God, we can no longer play God, or pretend that God is our henchman. God is not going to do this or that if someone does this or that crime. In our worldly legal systems, we can try our best to be just and punish or forgive according to our higher nature (although our judicial systems often punish or forgive based on things like social control, nepotism, etc.), but God will never act according to our whims. He judges each person individually according to what they’re going through. That is the Creator’s prerogative.

Accepting that, “[God] does whatever he pleases” (2:253) is a major step in purifying our self-serving, lower nature—the one that tries to set itself up as a god.3

When someone thinks they truly know God, they also try to limit his interaction with his creation. They believe that God only gives knowledge to people whom they deem worthy. If a seeker of Truth doesn’t go through specific avenues and institutions, they think God won’t bless that person with knowledge, or if knowledge is acquired, it’s inferior. This is false. It’s equivalent to saying, “God’s hands are tied.” Do you remember who made this statement before? The ungrateful did in 5:64. The Creator’s response:

“We have revealed signs making (all things) clear. God guides whomever he wills to a straight path” (24:46).

That feeling of liberation we get by admitting we don’t know God comes from surrendering our lowest self and giving up arrogance.

That’s right. We don’t know God entirely, but we do know of him though our interactions with him and his creation. God doesn’t do what we want or think. Yet, he always does what’s best. In this we have hope. Thus do we surrender to the limitless Creator of the universe.

1.Russell Brand mentioned that God was unknowable in one of his videos rebutting atheist claims about God not existing. His comment was the inspiration for this blog post analyzing how “knowable” God is using the Quran as the guide.

2.Note this verse addresses the believers and tells them not to let one qawm (which means nation, group, or people) mock another qawm. This verse is not saying that believers can mock people of other faiths but not their own. It’s telling believers that no group should mock another and that they should discourage anyone groups that do this since we are not God and cannot know God’s judgement of ourselves or any other people.

3.Remember Pharoah literally let his lower nature run amuck and made that exact statement proclaiming his “godhood.” Pharoah told his nation, “I am your Lord the Highest” (79:24).

4. Although this verse was said in the context of Jews denying that God blessed Prophet Muhammad, it still applies outside of this context because when we believe “God’s hands are tied” in any way whatsoever, we’re following the path “of those who earned anger and those who go astray” (1:7). God’s hands are ever outstretched to all of his creation.