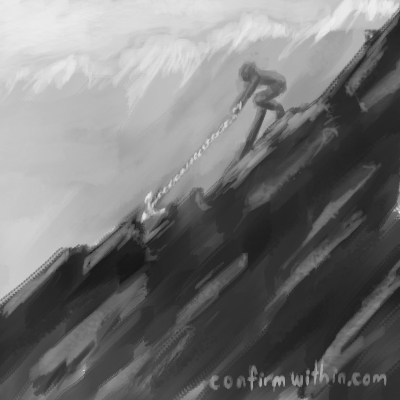 Anger is just a boiling,

onto the thing we’re losing—

that we think makes us “whole.”

chains pulling us to the earth.

Instead of loss pointing us

to the One we will never lose:

to keep us stuck to this earth,

And all the while,

keep us back and pull us down.

Help me let loose the anchors of anger,

that chain me to my lower nature.

Help me be a healer.

To heal myself and everyone around.

If you’ve read part 1 and part 2 of this blog post, you’ve discovered the balance between the two types of Quranic verses: mutashabehat and muhkamat. You’ve also discovered how beautiful the mutashabehat are. But should we really reflect upon all those beautiful symbols in the Quran? Since the mutashabehat don’t have a clear meaning but can resemble many things, wouldn’t it be better not to reflect upon them and avoid all the uncertainty?1Some take that position and cite the following verse as their motivation:

He is the one who revealed the Book to you. It comprises verses that are unambiguous [muhkamat], they are the foundation of the Book, while others are unclear and allegorical [mutashaabehat]. As for those in whose hearts is deviance, they follow what is unclear and allegorical thereof, seeking discord and its (absolute) interpretation. No one knows its (absolute) interpretation except God. Those firmly grounded in knowledge say, “We believe in it. The whole of (the Book) is from our Lord.” Yet only those possessing intellect understand (3:7).

Is interpreting the symbols really forbidden? Let’s read a little closer. What’s forbidden is the specific context mentioned in the verse: a deviant heart that ignores the muhkamat and interprets the mutahsabehat with the intention to do harm. These people seek an interpretation that causes disunity & disharmony.

How can an interpretation of a symbolic verse lead to disharmony? One way is that the interpretation is itself not in harmony with the rest of the Quran—and nature. It must be consistent with the whole book. For example, in part 1 of this blog post we discussed the “garment of God-consciousness” and how it connects to Adam and Eve’s nakedness when they ate of the tree. This interpretation is in harmony with the rest of the Quran (in fact, the verses mentioning the garment and Adam and Eve becoming naked are just a few verses apart: 7:22 & 7:26).

Another part of verse 3:7 is that no one knows the absolute meaning of the symbols in the Quran. Only God does. Only God holds the keys to the mysteries of the Universe. That doesn’t preclude our striving and searching for answers. We can gain a piece of the answer but will never know it in its entirety. No one knows the absolute truth about anything.2 We can study the physics of space but the more we learn, the more we realize we don’t know. By us not knowing and striving for answers, the Creator sets the stage for a beautiful student/teacher relationship!

Remember verse 59:21, mentioned in the previous post. This verse acknowledges the mutashabehat and tells us that their purpose is for us to reflect and engage our minds:

Had We sent down this Quran upon a mountain, you would have seen it humble itself and split apart from fear of God. Thus do We provide examples to mankind so they may reflect (59:21).

Thinking about the Quran’s symbols and allegories, seeking their deeper meaning, allows us to experience the Quran’s beauty for ourselves—each of us individually. It engages our minds and sparks our imaginations. Imagine the magnificence of a mountain whose peaks are so grand that they pierce the highest clouds. Yet even these dominant structures split apart and crumble from their humility and fear of God. Now contrast this with the hearts of some people that are so hardened and sick with arrogance that no amount of truth penetrates.

Everything in our existence is connected. When you see how the many symbols in the Quran are in harmony with each other and how they’re in harmony with nature, you begin to breathe an awareness of the beauty that surrounds us.

Reflecting on the mutashabehat is not only allowed, but it’s commanded. What’s not allowed is going to extremes, like only following one type of verse and ignoring the other, especially with the intention of being dishonest and doing wrong.

1. Mutashabehat most literally means things which “resemble each other.” In terms of the Quran, it refers to verses that are symbolic and allegorical, as the meaning of one concept resembles meanings of another.

2. No person’s knowledge of anything is complete, since we are not God. This verse explains it best, “[…] Above every possessor of knowledge is a one (more) knowledgeable” (12:76). If a person’s knowledge were complete, then they wouldn’t need the Creator.We are all inherently dependent and always in need of God, The Independent.

He is the one who revealed the Book to you. It contains verses that are clear [muhkamat], they are the foundation of the Book, while others are unclear and allegorical [mutashabehat] [. . .] (3:7)

The verses called the muhkamat are about laws and religious duties, like prayer and fasting, while the other verses, called the mutashabehat, are figurative and symbolic. (We’ll discuss the rest of this verse 3:7 in Part 3 of this blog post).

If we look at how the brain deals with language, notice that the left hemisphere recognizes the grammar and laws of arranging words while the right hemisphere mostly senses the emotional meaning of language through the rhythm of sounds.1

Isn’t this duality simply astounding? Not only do the brain and the Quran have two parts to their setup, but their functions mirror each other!2 The muhkamat deal with laws just like the left hemisphere, while the mutashabehat deal with abstract things like allegories and figurative language, much like the more abstract concept of emotion that the right hemisphere helps with.

Here’s an example of a mutashabehat verse. Do you remember the verse about the “garment of God-consciousness” being the best clothes we could ever wear?

O Children of Adam! We have given you garments to cover your shame and as an adornment. But the garment of God-consciousness [taqwa]—that is best. These are among the Signs of God so people may benefit (7:26).3

Being conscious of God/taqwa is a state of mind, but it isn’t clothes that we wear like a garment. So what could this mean? How could we wear taqwa? This verse is figurative 🙂

Let’s reflect on this a little to figure out what it means. What do we use clothes for? Clothes protect us from the heat and the cold, they beautify our appearance, and they cover our shame. Now think about being aware of God. What a beautiful and powerful state of mind. The garment of taqwa protects us and beautifies us like no other garment ever could!

Isn’t it interesting that Adam and Eve, peace be upon them, became naked when they ate the fruit of the tree?

Then [Satan] misled them through deceit. When (Adam & Eve) tasted (the fruit) of the tree, their shame became apparent to them and they began covering themselves with leaves in the Garden (7:22).

Did you notice something? What garment did Adam and Eve lose that exposed their nakedness? They lost their garment of taqwa! This is what left Adam and Eve naked and vulnerable, exposing their shame.4

Adam and Eve’s nakedness via the “original sin” of eating from the tree is in the Bible too, but the deeper understanding we have comes from the symbols placed so conveniently side by side in the Quran: 7:22 mentions their nakedness and 7:26 mentions the garment of taqwa! Adam and Eve didn’t just become naked as some people often think. They became naked because they lost their garment of God consciousness! This is indeed the worst kind of nakedness.

God is certainly our Master Teacher!

Let this beautiful symbolism be a divine warning. Do not let the embodiment of evil, Satan, strip us of our garment of God-consciousness, leaving us naked, vulnerable, and exposed to our lower nature, but let our garments be a source of protection and beauty.

Wow! The Quran is marvelous indeed, and we better understood its beauty by reflecting on its symbols, the mutashabehat. When you have two things residing in the same place, you must end up with balance. There’s a balance in our anatomy between the right and left hemispheres of the brain, and there should just as importantly be a balance in how we read the Quran. Let’s appreciate both types of its verses: the muhkamaat and the mutashabehaat. We are a “community of the middle way” after all (see 2:143).

2. At least in terms of how the brain deals with language.

3. Taqwa is the Arabic word for being aware and mindful of God, so the word “God-consciousness” is often used as its translation.

4. A friend mentioned this beautiful connection to me. Its credit is due to the deep-sighted Imam Warith Deen Muhammad.