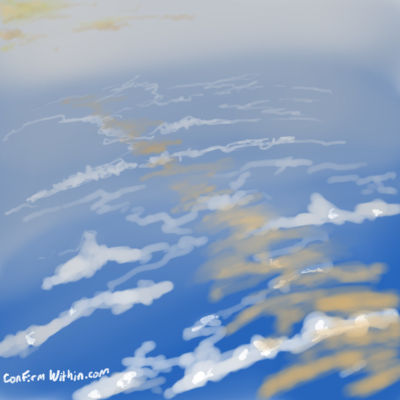 “We have revealed to you the Book in Truth as a confirmation for what came before it from the Book and as a guard for it […]” (The Quran 5:48).

Interesting! So the Quran confirms the truths in previous scriptures, and it’s also a guard that protects them from the changes material-minded men have added over time (2:79). For example, saying the prophets, our teachers, willfully or through other ills engaged in obscene crimes like Prophet David committing adultery then conspiring to have the woman’s husband killed, that Prophet Solomon became an idol-worshiper before passing, or that Prophet Lot’s daughters got him drunk then had incest with him multiple times-God forbid!2

Like all prophets, Prophet Jesus taught people not to worship the material—any created thing—but to serve God instead. He taught this beautiful, basic truth in the Bible by reinforcing the dependent and independent (material and Creator-of-material) relationship between himself and God:

Prophet Jesus beautifully declares that he is not Good. No one is Good. Good is Independent, just like Truth or Light. These are all attributes of God alone. Prophet Jesus reflects the Goodness of God like the moon reflects the sun’s light. Prophet Jesus is just dependent and all of his magnificence comes from God, the Independent. Prophet Jesus is reminding people to mature from the material mind state—our lower nature that wants to focus on something in the material world so we could label ourselves by it, objectify it, and worship it. He’s asking us to grow into higher consciousness: instead of serving the material, serve the creator of all material.

What does the Quran say about this beautiful point? Well, if you’ve guessed that it confirms it, then you’re right. Prophet Joseph says,

“I do not consider myself innocent. Indeed, the (lower) self commands towards evil—except whom my Lord has given mercy” (The Quran, 12:53).3

Prophet Joseph is saying that he, by himself, is not innocent. The Prophet’s innocence is solely dependent on God. It’s only God’s Goodness that Prophet Joseph reflects, something that God bestows by his mercy on whomever he pleases.

When we live by our higher nature, then we are “at one with God.” This is the state that all the Prophets lived in. They were in absolute harmony with the will of their Creator. They were never independent of God, but they did wholly and consciously accept their dependence on him. This is why in the Quran you read statements like “obey God and obey the messenger.” Because the Prophet Muhammad was at one with the will of God, obeying him is obeying God. This is also why Prophet Jesus said, “I and the Father are one” (Berean Study Bible, John 10:30 ) and also in this verse:

“Jesus answered, ‘I am the way and the truth and the life. No one comes to the Father except through Me. If you had known Me, you would know My Father as well. From now on you do know Him and have seen Him'” (Berean Study Bible, John 14:6-7 ).

First, remember that this verse is metaphorical and we must consider all the sayings of Prophet Jesus in the Bible. We “see” God after we’ve seen Prophet Jesus, because Prophet Jesus is “at one with God.” He is reflecting God’s goodness as one of the prophets God sent here to show us the way. Let’s get some more clarity from other verses of the Bible:

Jesus replied, “Is it not written in your Law: ‘I have said you are gods’ ? If he [God] called them gods to whom the word of God came —and the Scripture cannot be broken— then what about the One whom the Father sanctified and sent into the world? How then can you accuse Me of blasphemy for stating that I am the Son of God? (Berean Study Bible, John 10:34-36 )

Prophet Jesus did not mean that he was the literal son of God, like the Jews who wanted to stone him thought. In fact, he clarified what he meant by quoting Psalm 82:6 from the Old Testament. Here is the full verse he quoted:

In the Old Testament, being at one with God was referred to as being “God’s son” or being “gods,” but it doesn’t mean these literally. To avoid the confusion from people thinking that Prophet Jesus or others are literally god or God’s sons, the Quran says:

“Say God is one. He does not have children nor was he the child of another, and there is nothing comparable to him” (The Quran, Chapter 112).

Those looking at the Biblical phrases with their material nature will interpret them materially / literally.

Notice the pattern of similarities and remember what God said the Quran’s purpose was. This book is a confirmation of the scriptures that came before and a guard over them. The Quran clarifies what could have been misconstrued and points us away from our lower, material nature, back to our higher, spiritual nature.

The source of everything hazy and unclear is our desire for the material world. This world is alien to our true essence. Follow your God-given higher nature, as all the Prophets did, submit to the Creator alone, and be at one with God.

1. Prophets Jesus and Joseph are referred to as Prophets Esa and Yusuf, respectively, in the Quran.

For when Solomon was old, his wives turned his heart away after other gods; and his heart was not wholly devoted to the LORD his God, as the heart of David his father had been. For Solomon went after Ashtoreth the goddess of the Sidonians and after Milcom the detestable idol of the Ammonites. Solomon did what was evil in the sight of the LORD, and did not follow the LORD fully, as David his father had done (New American Standard Bible, 1 kings 11 4-6).

And here is the Quran guarding the scriptures and protecting them:

“And they follow what the devils recite against the kingdom of Solomon. Solomon did not disbelieve (by worshiping idols) […]” (The Quran 2:102).

3. This statement was made after Prophet Joseph was freed from prison and exonerated of the allegations against him, but it also applies to any time and place.